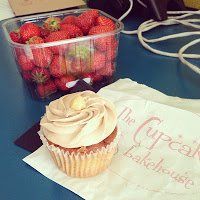 Okay, so it’s been a few days–actually more than a few–since I’ve posted.  London never ceases to keep me on my toes, that’s for sure.  Let’s play a little catch-up.

Before I begin, let me say just how ecstatic I am that I found strawberries for two pounds.  Everywhere I’d looked before, the berries hadn’t looked too ripe and were priced a little too high for my preference.  But I made a trip to Covent Garden this morning and found these berries at a street vendor for two pounds, and they look delicious.  I just hope I don’t eat them all today and can make them last for at least a few days.

This Nutella cupcake from The Cupcake Bakehouse also looks delicious.  I think I hit the jackpot today.  Covent Garden visits always bring me something good.

As I’ve mentioned before, the theatre here is superb.  I’ve seen lots of stage shows in the States, and one production of King Lear at a small theatre company near Philly.  I know comparing plays to musicals is kind of like comparing apples and oranges, but I can’t help it.  I wasn’t sure how much I would enjoy a non-musical, non-Shakespearean play, but we’ve seen Public Enemy and War Horse, and I loved each.


War Horse, originally a book and now a film, took superb to a whole new level.  The horses (and a random farm goose) were acted as life-size puppets a la The Lion King, and they were just brilliant.  Presenting the horses this way really made them seem like characters themselves, especially the main horse, Joey.  The story itself is heart-wrenching: a young boy Albert creates a special bond with his horse, which is then shattered when the horse is taken away to serve as a “war horse” in World War I.  The final scene nearly broke my heart, and I almost cried.  I would love to see a stage production of this again.  But maybe not the film…I don’t want to tarnish my dramatic stage experience.

After seeing a smaller production of King Lear in high school, I was super excited to see his plays performed in their home, the Globe Theatre.  Last week’s show was The Tempest, which I just read at the end of last semester.  I’m never sure what to expect with any production, but this showing of The Tempest blew my mind.  The air nymph Ariel seemed like such a vague character in terms of physical description; I wasn’t even sure if he was supposed to be male or female.  This Ariel was extremely acrobatic and agile…he climbed all over the stage, swinging from platform to platform, all while supposedly hidden from the others.  The other character that particularly impressed me was Miranda.  When I read the play in class, she came across as weak and passive, letting her father Prospero control her life, and I didn’t like her all that much.  Any and all of those notions were completely shattered after seeing this play.  She was portrayed as a lot more assertive and dynamic, and her mannerisms alluded to more confidence in herself and her decisions.  In act 4, when Prospero speaks to Ferdinand about marrying Miranda and references them consummating their marriage quite crudely, this Miranda reacted  with astounded facial expressions, like she couldn’t believe her father was speaking like that in front of her.  Props to her!  I feel like, after seeing that production, I could reread the play and see Miranda in a totally different light.

I could go on about Caliban and Prospero, too, but that would make this post twice as long as it’s already going to be, so I’ll save that for another time.  Moving on now…

Last week, we visited the Museum of London.  It’s smaller than the British Museum that we visited in our first week, but I liked that better.  There was still plenty to see, but I didn’t feel like I had to traverse a huge museum to see everything.

The Museum of London specifically covers London’s history, from its Roman beginnings to the modern city.  It’s really interesting to see the city’s timeline laid out before you.  And since it’s concentrated just on London and not Europe as a whole, it’s a lot easier to take in.  My professor says there are three kinds of museum visitors: the “streakers,” “strollers,” and “studiers.”  I’d like to think I’m more of a “studier” than the other two, but sometimes I just like to see everything and be done, unless I catch something that really interests me.  Maybe I’ll work on that when we visit the National Archives this coming week.

We do so much during the week that it’s hard to cover everything in one post without writing a novel.  So you can move on with your day, here’s a Glee-style wrap-up of everything else:

We rode the London Eye.  It was cool to go up and around and to see the city from that angle and view, but I don’t think I’d ever do it again.  Once is enough.

A smaller group of us found Hamley’s, London’s largest toy store, on Regent Street.  Imagine FAO Schwartz, only about ten times bigger, and almost everything you can imagine.  There was even a sweets shop on the top (sixth) floor.

We visited the East Village, where the Olympics were held last summer.  It’s currently under construction and being turned into a residential neighborhood with apartment buildings.  A couple of the stadiums are staying there, but most things have been taken down.  Cool site to see, and would be cool to see a couple years from now once it’s completely changed.

And as usual, I spend all my free time either blogging from my flat or writing and/or drinking coffee in the presence of St. Paul’s or Trafalgar Square.  Or trying to draw myself away from all the scarves at Covent Garden.  But it’s such a struggle because they’re so cute and so affordable…

How to Treat Yourself for Valentine’s Day

Drive about 45 minutes north of Key West to Bahia

If you’ve never had a Grilled Caesar Salad, this

Peach & Burrata toast is one thing I’ll never be

Got 6 miles of paddling in on the river last weeke

We are LOVING our Sun Sugar cherry tomatoes this y

These easy mini peach crumbles have been on repeat