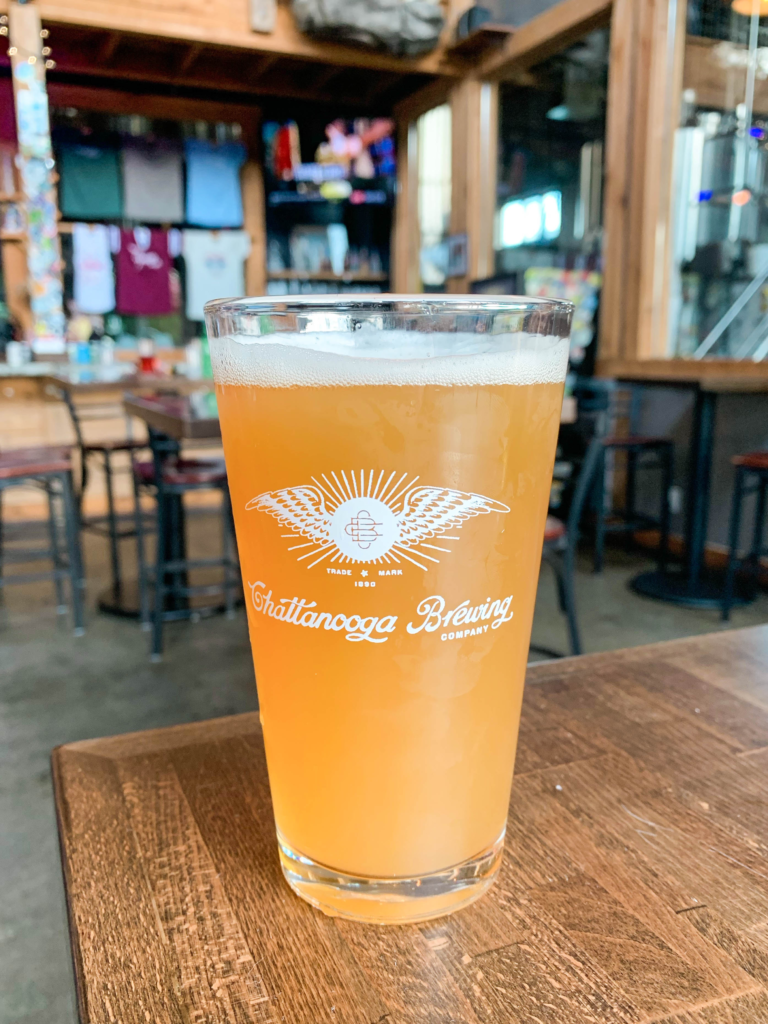 When I moved to Chattanooga, TN, in 2015, the craft beer and brewery scene was still pretty young. There were a handful of breweries, but none that really jumped out at me, or blew me away. To be fair, I wasn’t a huge craft beer fan at the time. But in the seven years I’ve lived here, the craft beer scene has grown significantly, and there are some really awesome breweries (and tap rooms) in Chattanooga.

Here are some of the best breweries in Chattanooga, TN.

Most breweries have a pretty solid variety of brews: IPAs, ales, stouts and darker beers, lagers, pilsners, and sours. And most offer flights of 4-5 beers. Don’t sleep on some of the tap rooms, either!

Honestly, when I think of craft beer in Chattanooga, Hutton & Smith Brewing is the first one that comes to mind. It’s arguably the best, most prolific, and most consistent brewery in Chattanooga. In addition to their many mainstay beers, they innovate often and encourage creativity in their brewing. Every June for their birthday, they release special “Can-iversary” beers that are only available for a limited time. And those Can-iversary beers are usually some of their best. Favorite beers: Promenade IPA, Tectonic Session IPA, Prusik Pale Ale.

Chattanooga Brewing Co. was actually the very first brewery ever opened in Chattanooga—way back in the 19th century! It shut down during Prohibition and didn’t open again until 2010. (Read more about its history here.) When I first moved here, CBC was kind of whatever. The food was good and the beer was drinkable but nothing to write home about. These days, the beer and the food are only getting better and better. I can’t go there and not get a basket of fries. As an added bonus, CBC is the home bar for Chattanooga Football Club, so we spend lots of time and money there. Favorite beers: Faultless lager, Cashual Friday session IPA.

OddStory Brewing Co. is another long-time Chattanooga favorite. It opened in 2016 and quickly found its niche in funky sours and pastry stouts. After several years of growth and success, OddStory is opening their second larger location later this year, with a full kitchen and food menu, 20 taps, and a biergarten! Although I’m admittedly not a huge fan of sours or stouts, I’m excited to check out their new space once it’s open and see what new stuff they have on tap.

The next two breweries on my list both opened in 2018. Naked River Brewing Company is located in one of the oldest buildings in Chattanooga, a former foundry that had been vacant since the 80s. The owners bought the building in 2017 and turned it into the brewery it is now. Naked River boasts a variety of beers and some delicious house-smoked Texas-style barbecue (love their bbq tacos and pork rinds). One thing I love about Naked River is their dedication to water conservation and supporting local farms and vendors. Favorite beers: Mangolorian wheat, Naked Light, Cosmic Turtle IPA.

WanderLinger Brewing Company opened shortly after Naked River in 2018 and brings something different to the Chattanooga beer scene. They offer a space for artists to gather and share their work, and have a full calendar of live music and art shows. Stop by their taproom and enjoy a Joose Caboose IPA and a board game and admire the artwork on the walls.

If tap rooms are more your style, check out Pax Breu Ruim on Main Street. In addition to lots of beer taps, PBR has a full wine selection and cocktail menu. They offer mug clubs for beer and wine. Most weekends they host food trucks or pop-ups so you can enjoy some food with your beverages. PBR is also home to oepn-mic comedy every other Tuesday night.

Five Wits Brewing Co. // Five Wits is part of the Monen family empire of Chattanooga—the same people who own Milk & Honey, Community Pie, Urban Stack, Taco Mamacita, and Clyde’s. Located in Market South on the Southside, Five Wits boasts a variety of beers from the lighter to heavier sides, and a full menu with what I call elevated bar food. Don’t skip the cheese bings, trust me. My dad says the cheese steaks are the best he’s had outside of Philly.

Disclaimer: the next two breweries are not originally from Chattanooga. They’re expansions from Atlanta and Nashville, respectively. Now, Chattanoogans usually aren’t too fond of out-of-towners coming in. I admit I was hesitant about these breweries at first (especially the Nashville one). But the fact that they chose Chattanooga as their expansion city, to me, says a lot about the future of craft beer here and the culture we’ve created.

Cherry Street Brewing // I’d heard of Cherry Street before, but it wasn’t until my best friend in Atlanta spoke so highly of it that I got excited to get one here. I gotta admit, though, that Cherry Street is now one of my favorite breweries in Chattanooga. Their beer is impressive, and the food is super delicious. You gotta get their buffalo chicken dip. Favorite beers: Lake Beer lager, Juicy Suzy IPA, Steppin’ Razor IPA.

Tailgate Brewing // Tailgate went into the building that once housed Terminal Brewhouse (RIP). Talk about a place with lots of options! Tailgate is a great place to take your indecisive friends, or your friends who want to try a little bit of everything. They offer lots of beer, a couple seltzers, ciders, slushies, and a couple wines and cocktails. Their food is good, but definitely more “bar food”-y. Big fan of their boneless wings (in Rodeo sauce), waffle fries, and garlic knockers (think oversized garlic knots).

Monkey Town Brewing // Yes, it is named after the Scopes Monkey Trial (look it up, it’s interesting). Monkey Town first opened in 2014 in Dayton, TN, about 45 minutes up the road from Chattanooga; this year they opened a location right here in Chattanooga. In addition to their beer selection, Monkey Town has a full-service kitchen. Their original Dayton location has wine and liquor, and the new Chattanooga location has wine, seltzers, and slushies. I haven’t been here enough yet to find my favorites, but I’m sure I’ll get there.

If you drive out a little further, you’ll find even more burgeoning breweries in North Georgia, up toward Knoxville, and heading out toward Nashville. But that’s another post (and adventure) for another time.

For more great places to enjoy craft beer in Chattanooga, check out this post from 2017.

What’s your favorite brewery in your city?

How We Spent Our Honeymoon in Key West

These Pumpkin Cake Mix cookies are my absolute fav

Pumpkin Spice Mug Cakes (for two) are just the tre

San Diego was a delight. ☀️ Here are some of t

This Veggie & Orzo Pasta Salad was one of my go-to